If you were to judge the level or “size” of a performance based on the size of the outside of the venue, you would be sadly misguided. It would be a huge underestimation, as it would have been with Limblifter’s performance at This Ain’t Hollywood on March 26 in Hamilton. Walking into the quaint little venue with the friendly staff, you would never guess you were about to be treated to such a huge show. It was one of only six concert dates on their current tour to promote their upcoming release, Pacific Milk. It is their fourth new album in eleven years, not including the vinyl release of their self-titled debut album in 2012. Pacific Milk will be released on April 7.

The term “supergroup” is being thrown around a lot lately, with musicians forming other bands by collaborating between albums with musicians from other successful bands. Frontman Ryan Dahle, in fact, is a member of Canadian supergroup Mounties, along with Hawksley Workman, Steve Bays (Hot Hot Heat), and Parker Bossley (Gay Nineties). The current lineup of Limblifter is a supergroup in a sense, drawing from an impressive mix of talent. Dahle is joined by longtime Limblifter bassist Megan Bradfield (West Coast Symphony, the VSO, A.C. Newman, the Salteens, Ryan Dahle solo band), keyboard/guitarist Gregory Macdonald (Sloan, Thomas D’Arcy), and new drummer Eric Breitenbach (Drugzndreamz, char2d2).

After opening sets by Detroit’s Pony Show and Hamilton’s Customaries (formerly Old Lady), and a brief equipment setup, Limblifter quietly took their place onstage. By then, the audience was more than ready. The band kicked off their set with “Hotel Knife,” the first of ten songs they would play from Pacific Milk, along with another 10 from their first three albums.

Aside from tech difficulties with the drum mike stand, and a drum change about halfway through the show (I pity the poor drums at the mercy of Breitenbach’s sticks! Wow!!!), the night went off without a hitch. The band was tight and the audience loved it. Dahle was quick to set up a personal connection with the audience, sharing his origin of Regina, another steel town. He bantered with the audience and other band members between songs, and the fans lapped it up. Kickass drummer Breitenbach hammed it up for the cameras, sticking his tongue out and shaking his head quickly from side to side to pose for a shot, without missing a single beat. Bradfield and MacDonald were equally as personable. There was clearly a mix in the audience that night, from newcomers to the band, right up to seasoned hardcore fans who shouted out song requests and sang along word for word with the band. 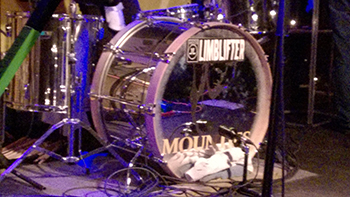 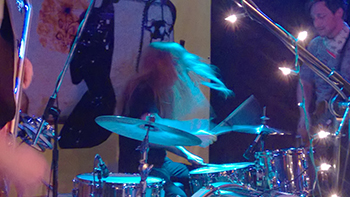 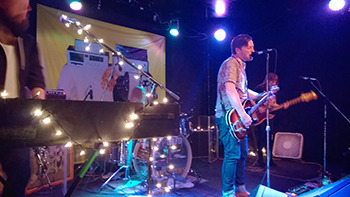 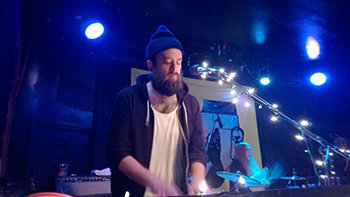 When Limblifter finally called it a night and the house lights were lit, the audience was left with the sense of having just watched their friends’ band jam out in their basement – but with infinitely more skill, and a sublimely written setlist. Let’s hope we don’t have to wait another 11 years to hear from Limblifter again. Though the last thing the music world needs is to pull Dahle away from Mounties, Limblifter is much too good to be put to rest yet.

Trish Melanson lives in the Toronto area with her three boys, Nicholas, Justin, and Eric, her dog Jakkson, and her cats Max and Jagger. She is the former host and producer of Canadian Kickass, a weekly two hour radio show on New Jersey's Chestnut Radio, showcasing Canadian Music. She is also a former Web Content Manager of Indie Soundscapes, an online showcase for Independent Music Artists Worldwide, and was a regular music contributor to The Stroumboulopouli. She is a fervent supporter of the Toronto live music scene. In a past life she was a teacher and Vice Principal in Durham Region. She has many more new and exciting projects waiting in the wings. ;)