The self proclaimed “Lords of Portland” brought their unique blend of psychedelic infused alt rock to The Danforth Music Hall on a rainy August night. The show was deeply impersonal. Rather than stage banter, most communication with the crowd was limited to pre-written phrases flashing on the stage throughout the show. 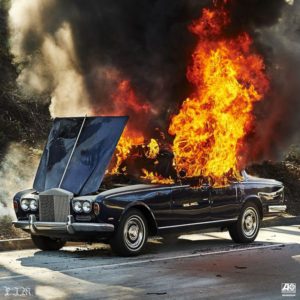 And somehow Portugal. The Man pulled it off beautifully.

For casual music fans Portugal. The Man are a hard sell. They can come off as the worst type of pretentious hipster rock. But to write off this band based on the ridiculous notion that everything hipster is awful is to ignore one of the most vibrant and original bands to emerge in the 21st century.

From the opening riffs of “For Whom the Bell Tolls” to the final encore of “Atomic Man”, Portugal. The Man delivered a nonstop sonic barrage. Thanks to the aforementioned pre written stage banter, time between songs was almost non existent. At times it felt as if Portugal. The Man was playing one long song, with some random Pink Floyd and Oasis covers thrown in for good measure.

It was clear from the set list that this is a band that doesn’t care much for regular concert conventions. Opening with a cover of Metallica’s “For Whom the Bell Tolls” and finishing the main set with Oasis’ “Don’t Look Back in Anger”. Probably the strangest addition to the set is playing their smash single “Feel it Still”. It was an odd choice, but not an unwelcome one. It’s a great song, so what rule says you can’t play it twice?

Portugal. The Man are probably one of the most interesting and original rock bands to come out in years, and they thrive on stage. They bring an unconventional presence to their concerts that has to be seen to really be believed.

Photographer by choice, writer by necessity. Since moving to Toronto in 2011 Morgan has become an active member of Toronto’s music scene. On any given night he can be found at various venues with his camera in hand. There’s nothing he loves more than exploring all the venues this wonderful city has to offer, discovering new bands and genres along the way.