Silversun Pickups w/ Minus The Bear

A rainy, nearly above freezing night couldn’t stop true fans from going to REBEL; the newly renovated and renamed nightclub Sound Academy, for the Silversun Pickups show. This was apparent by the fact that the floor section was nearly filled to the end and the balcony was filled around its borders.

Opening for Silversun Pickups was Minus The Bear, a 5-piece indie rock ensemble formed in 2001 in Seattle. In the crowd there were a few patrons sporting Minus The Bear merchandise so clearly they do have a following. They came out at 8PM sharp and warmed up the crowd with “Give & Take”. a song from their newest album, VOIDS. Leader singer Jack Snyder’s voice was clear with diction and didn’t get tired by the end of their 14-song set. However, his voice isn’t the most identifiable (which isn’t to say that it takes away from his clear singing abilities). 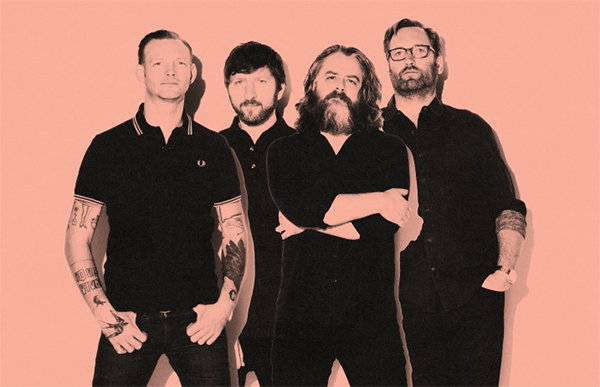 As their bassist and supporting guitarist, Dave Knudson and Cory Murchy were center stage and rocking around while playing off of each other. During which Joshua Sparks, their touring drummer, played their tracks accordingly with drumming compositions that seemed like they could be inspired by the Silversun Pickups’ drumming considering their similar patterns.

Most of the songs were consistent with their indie rock style however slightly repetitive. There were still those songs that broke out of their indie rock shell like “Into The Mirror” from their 2010 album OMNI. It had almost ’80s-like synth melodies and was one of the very first songs patrons went from head bobbing, to grooving.

Only half an hour later, Silversun Pickups lit up the stage as they opened with their single “Nightlight” from their 2015 record Better Nature. A classic SSPU song from their debut LP Carnavas, “Well Thought Out Twinkles” soon followed, getting the crowd looser and singing along. Then a mix of their newest material before they blasted “Panic Switch” which was definitely the song of the night with the strobe lights following on tempo. They closed off with their biggest and first hit “Lazy Eye” where unfortunately included a part where lead singer Brian Aubert was supposed to scream the lyric “straight through YOUR gaze” but faltered a bit on “your” (something probably only a critic would notice). He made up for it with stronger screams in other places, including during the song “Friendly Fires” when he brought his guitar to his mouth to echo or reverberate his vocals. Overall, his voice sounds exactly like how it does on their records with his iconic raspiness.

There was lots of love from the crowd for bassist Nikki Monninger as she played some iconic bass lines like from “Panic Switch” She even extended the bass line in the bridge of the song. Her basses really are the backbone of a multitude of songs.

After every song, they were met with loud applause and finished of to a 4-minute encore, a sign of a great concert for fans. The audience got down to their music without theatrics, but still had fun between songs as the band shared stories of Toronto and of Aubert breaking his arm during their tour. If a person didn’t know these bands prior to the show, they might find these bands’ sounds repetitive, but there are some stand-outs that just blow people away and make these people check out their material.

Minus The Bear Links

Vicki Mahony is taking her hobbies of concerts, photography, and ranting and putting them to good use! She is a live-music photographer and reviewer.