Mötley Crüe is The World’s Most Notorious Rock Band. Vince Neil (vocals), Mick Mars (guitar), Nikki Sixx (bass) and Tommy Lee (drums) laid the foundation for their inimitable career in the ’80s with their genre-bending music, a mix of anthemic choruses, stadium-sized riffs, punk rock and melodic power, along with their relentless reputation, typifying an excess never before seen in modern music.
But they didn’t stop there.

Mötley Crüe continued to evolve through the ’90s and beyond, releasing their NY Times best-selling book The Dirt long before it was common and cool for celebrities to have their own tomes. The page-turning rock epic offered a keyhole view into life in The Crüe. It is currently being adapted into a feature film by noted director Jeff Tremaine.

Mötley Crüe reinvented itself yet again through the ’00s and the present decade by continually doing new things, such as launching a branded tour known as Crüefest. Also, The Crüe was the first band to do a rock residency in Las Vegas, something its peers, Def Leppard and Guns N’ Roses, did after them. Their sold-out stint at the Hard Rock Hotel & Casino further elevated Mötley Crüe’s mythos, demonstrating the fact that they can do anything. They’ve also executed impressive, innovative live production, such as Lee’s roller coaster, which sends him around a 360-degree loop during his drum solo. 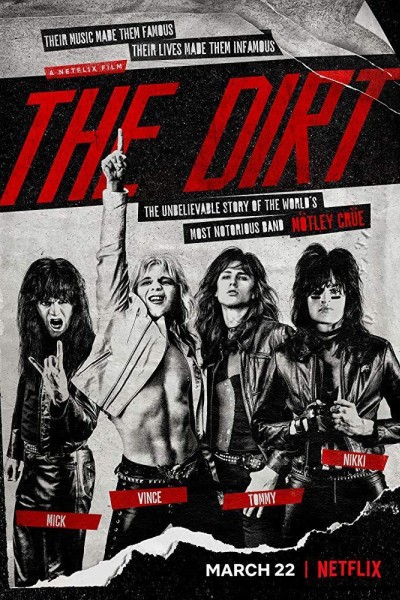 Besides the hook-filled, ground-breaking music, Mötley Crüe’s image pioneered an attitude, fashion sense and lifestyle, influencing a legion of fans who copied its look.

The members of the band have published a total of five New York Times Best-Selling books, including The Heroin Diaries and This Is Gonna Hurt by Nikki Sixx; Tommyland by Tommy Lee; Tattoos and Tequila by Vince Neil and the infamous The Dirt.

This capacity for reinvention and innovation is why Mötley Crüe continues to attract fans young and old – many who weren’t even born during the band’s early reign. That fact proves that they are the rock band for all ages and eras.

The Dirt (A Netflix Original Film)

In 2006, film adaptation rights to the autobiographical book The Dirt: Confessions of the World’s Most Notorious Rock Band, authored by Neil Strauss with Tommy Lee, Mick Mars, Vince Neil, and Nikki Sixx, were bought by Paramount Pictures and MTV Films. At the time, Larry Charles was tapped to direct the film. However, production on the film stalled and in 2008 Sixx spoke of his frustration in an interview stating:

“We’re trying to get them out of the way to make this movie that should have been made a long time ago. MTV has become bogged down in its own way. It’s a channel that used to be hip and has now actually become unhip. We signed with them because we believed they were right, but they haven’t come to the table. We need to find the right partner. They are not the right partner.”

In November 2013, Jeff Tremaine signed on to helm The Dirt, with the film having been dropped by MTV Films and Paramount Pictures. In January 2015, Focus Features picked up rights to the film. However, production languished in development hell until March 2017, when Netflix bought worldwide rights to the film. At the time, Liam Hemsworth, Emory Cohen, and Douglas Booth were being eyed for lead roles in the film. In November 2017, Booth officially signed on to star in the film. In January 2018, Machine Gun Kelly, Iwan Rheon and Daniel Webber joined the cast. In February 2018, Tony Cavalero joined the cast. In March 2018, Rebekah Graf, Leven Rambin, and David Costabile joined the cast.

The Dirt is an upcoming American biographical musical comedy-drama film directed by Jeff Tremaine from a screenplay by Rich Wilkes, about glam metal band Mötley Crüe. It is scheduled to be released on March 22, 2019. The film’s Hollywood premiere took place on March 18, 2019.

Daniel is an illustrator/graphic designer based out of Austin Texas. He graduated from Pratt Institute with a Bachelors degree in Illustration and an Associates degree in Graphic Design. Daniel started his career in graphic design in the world of online casinos. Since then he’s worked with various clients from around the United States and Canada including but not limited to NHL, Subway, Paraco Propane, Pitney Bowes, Xerox, Conduent, Nestle Waters, The Spill Magazine, Stamford CT’s DSSD, Beechnut Baby Foods, Elizabeth Arden and much more.

SPILL FEATURE: 30 YEARS AND STILL VERY MUCH IN EFFECT – A CONVERSATION WITH MAESTRO FRESH WES