A CONVERSATION WITH DARREN AUSTIN HALL

Darren Austin Hall is a fixture in the growing sound healing community. Inspired by the cosmos, nature, and his growing family of crystal and alchemy bowls, this ceremonial musician has graced numerous yoga studios, open parks, ecstatic dance gatherings, cacao offerings, various major music festivals and even some Ganja sound baths with his intuitive music.  He has even performed for patients at Toronto General Hospital.

Hall has just released Songs of Source.  “This is my first masterful crystal bowl/shamanic album where I’ve channeled all the music,” he says sitting on his downtown Toronto porch one July afternoon.  “The major intention for this album was to bring sacred and Shamanic music together as a healing whole.”

The ethereal album features seven tracks, or “song channelings,” of Hall’s deep, powerful voice, 16 bowls, an ancient monochord he shipped from Germany (“I was sweating the entire time hoping it would arrive in one piece!” says Hall) and a Shamanic-drumming track. Each song centres on a poem of intention that Hall wrote and included in the liner notes (he is also a writer and poet, as well as a leader of Conscious Men’s Groups). 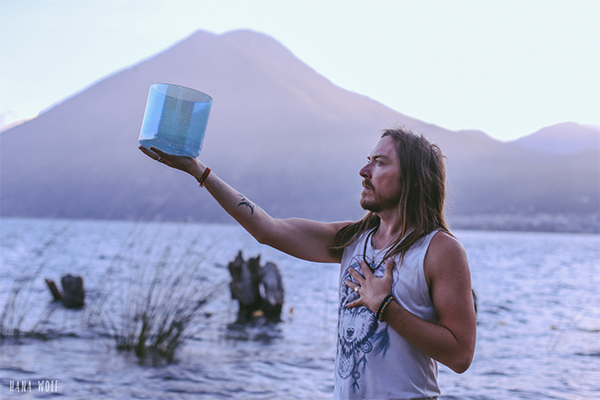 “At most of my performances I like to offer an educational component as not many people understand what sound healing really is,” Hall says.

Crystal bowls are tuned to a different western musical scale but the vibrations emitted during their playing activate the alpha brain wave state, and deeper Theta and Delta wave states. This is due to the crystalline structures within our bodies responding to the crystal bowl’s vibrations. Many who have participated in one of Hall’s sound baths report dreamlike visions and a sense of leaving one’s body and entering into a state of deep relaxation.

Although eight tracks were planned, the instrumental track would, strangely, not record well. Hall was fine with this as “seven felt like a satisfying number.”

Hall is also a teacher, offering Source Resonance, a 75-hour training in Sound Healing.  He will be touring Costa Rica, Canada and Europe in 2019.

Darren is hosting a Sound Bath For Peace this Sunday at Trinity Bellwoods park 11:11 AM.
Event details can be found HERE.

Talia Wooldridge is an avid music lover, composer and ethnomusicologist who contributes artist interviews, live concerts, festivals and album reviews for Spill Magazine. She has written extensively on the intersection of music, personal identity and cultural symbolism with an early focus on Latin American Hip Hop and female Cuban rappers. In her spare time, Talia writes, composes music and manages Music Can Heal, a non-profit that brings live, award-winning musicians to inspire healing in hospitals, hospices and communities in need. Her next project is an interactive music-travelogue exploring music cultures and music travel around the globe. Follow her here: www.taliawooldridge.com + www.movetoyourownbeat.com.

SPILL FEATURE: THE PULL OF AUTUMN – A CONVERSATION WITH DANIEL DARROW