Friday brings the release of the new ‘Skeleton House’ by tremolo-dawning melodic post-punkers Crooked Ghost, which will be followed by a limited edition 12″ vinyl release in early 2019. Based in Asheville, NC, this is a band that needs to be on your radar and in your earbuds if you ever were a fan of The Smiths, Suede or Muse.

“Skeleton House’ is the band’s sophomore long-play – a dark and hazy dreamscape of lush and angular melody, with a stark lyrical rawness touching upon such subjects as addiction, trauma, loss, superstition, and everything that gets left behind after a catastrophic event. The album consists of eight tracks, ranging from dreamy and playful to anguished and harrowing. Billowing vocal patterns weave intricate stories between shimmering guitar crescendos, cascading synths and mathematical percussion.

Crooning indie post rock would be the best way to sum it up – highly agreeable sounds for the post-everything crowd and those too young to remember their antecedents. Standout tracks include ‘Sleepwalker’, ‘Body in Stars’ and ‘Catch Fire’.

This album follows up their debut LP ‘Strange Burial Rituals’, released in March 2017. This new offering has two distinct halves: the first is lighter, the second darker. The whole thing plays out like a story, or rather, two opposite stories that are intertwined.

The band also presents the video for their ‘Sleepwalker’ single, directed by Rome Widenhouse. “The song ‘Sleepwalker’ was one of the first written for the new album, and everything about it just worked. The song itself is in reference to addiction and a dissolution of ones sense of self; self-medicating and numbness. I wanted to bring light to something dark, yet still tell an honest story. Something about this song has always stood out for us, says frontman Ray Clark.

“The music video was shot over a period of several weeks, and includes shots of that eclipse everyone was so excited about. The video is a bit surreal and has a sort of Twin Peaks meets the X-Files vibe. It was a lot of fun to shoot, even the traipsing barefoot through the woods in nothing but a bedsheet and getting poison ivy part. At one point our director took a tumble down a cliffside and we thought he was done for!” 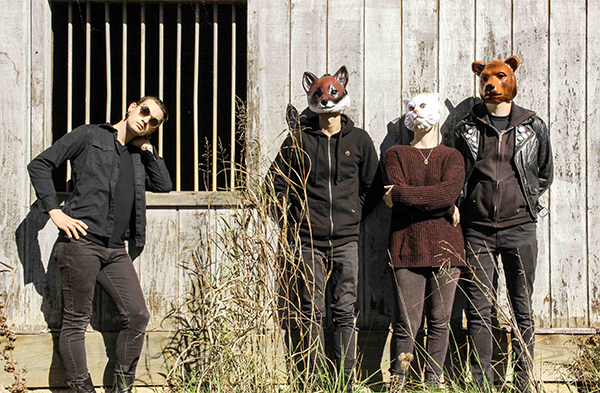 Formed in Seattle in 2013 as an acoustic side project by Ray Clark, Crooked Ghost was initially a channel for leftover songs that didn’t seem to fit in any of the other bands Clark was involved in, but quickly became the focal point of Ray’s creative energy. Ray soon fled the musically-saturated Seattle scene to find himself in the intensely creative heart of Asheville, North Carolina.

With a guitar case full of lyrics of songs never intended to be heard by anyone, somehow, something had begun to spark again. Intimidated by the idea of a solo project, Ray joined with Chris Saldin, who would play bass, and bought an electric guitar, set on bringing Crooked Ghost to life. Together with drummer Jon Wyatt, the songs came to life. A few months later, they entered the studio to record their debut album.

They were eventually joined by Charles Reed on guitar and Alex Cannon on keyboards before recording the heavily emotive and dreamily lush ‘Skeleton House’. With the power-pop punch of Catch Fire, the dark-disco punk breakdown of Roadkill, to the angular yet dreamy swoon of Sleepwalker, Skeleton House will impress and even haunt you.

“These songs were inspired by the loss of someone I loved to a fire. The idea that something like a fire could destroy so much, but still leave something behind was so inticing to me. I wanted these songs to represent resilience and strength, and to be able to process loss in a healthy way. I wanted to find a way to bring light to the darker things I was experiencing, and to arrange the pieces into something beautiful,” says Ray Clark.

“We recorded this album up in Black Mountain, NC in the dead of winter. The snowy and icy landscape definitely added to the album’s atmosphere.  This is also our first release on vinyl, making it very special for all of us. As kaleidoscopic as it sounds, I feel we very much achieved the piece of art we were wanting to make.”

As of November 23, ‘Skeleton House’ will be available on CD. It can already be ordered via Bandcamp and is also available across music stores and streaming platforms such as iTunes and Spotify. Look forward to the vinyl release happening in February 2019.

Also check out their cool video for ‘Sleepwalker’ with loads of dark-light imagery:

SPILL FEATURE: GOD OF WINE AND PLEASURE – A CONVERSATION WITH BRENDAN PERRY OF DEAD CAN DANCE