Starting out the year with a banger, Adrenalizer will be releasing their much anticipated EP What A Rush on Saturday January 26th 2019. What A Rush will be released on CD as well as on bandcamp, Spotify, iTunes and everywhere else where music is downloaded. The album was recorded by John Dinsmore and mastered by Adrien Idiot. The artwork was done by Indonesian visual artist Tremor. Adrenalizer are a heavy metal band based in Toronto taking inspiration from bands like Judas Priest and Accept, and mixing them in with aspects of Rock and Roll, Thrash, Punk and even a hint of Black Metal. With powerful vocals by Terrible Terje, face melting guitar solos by Steve Goodtime, and Mitch Z, punishing drums by Jake Greasy and rounding them out on bass is Gab Hole.

You can see Adrenalizer live on Saturday January 26th at Coalition in Toronto with The Hacked, SAGO, Pisser and Rynheart. 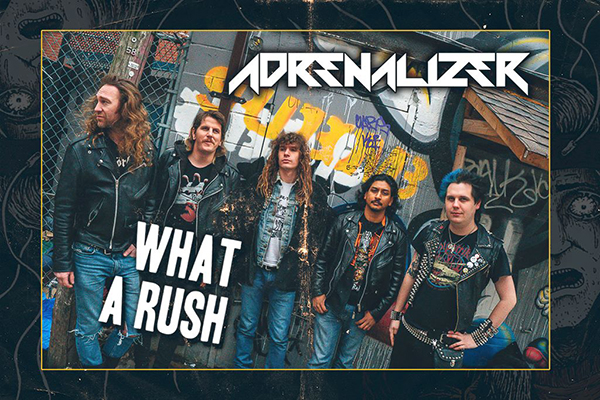 “I started writing these song back in 2014, originally they were going to be used by another band I was in, but I realized very soon after that it was different than what we had been writing. I left that band and decided to create something fresh and new, and in 2016 I started recording with a friend, and by 2017 it was time to get others involved. It took another year or so to get things going, and after working with a number of different people we came up with this lineup, and I couldn’t be happier.” ~Terrible Terje

SPILL VIDEO PREMIERE: ONE IN THE CHAMBER – “ITCHIN’ BACK”