SPILL FEATURE: 40 YEARS OF BAUHAUS AND COUNTING – A CONVERSATION WITH PETER MURPHY

40 YEARS OF BAUHAUS AND COUNTING

A CONVERSATION WITH PETER MURPHY

“It’s like a beautiful, fast, black jaguar…not the car, the animal.” The veracity of Peter Murphy’s report on the 40 Years of Bauhaus Ruby Celebration Tour—we spoke one week after food poisoning and laryngitis forced him to cancel a show in Heerlen, The Netherlands, and one week before he was reportedly ejected from his own gig in Stockholm—is questionable. Talking to Peter Murphy is a lot like when a friend touts their latest success on social media: there’s little expectation of a response save for your tacit approval, and don’t dare change the subject. The story you really want to hear may in fact be buried in their anecdotal canon somewhere, but regardless, you suspect their firsthand account lacks balance.

Despite a gruelling schedule that for many performers would have precipitated more than the couple of glitches marking this tour, 40 Years of Bauhaus sold well. Moving to larger venues or booking additional nights after selling out in several cities (including the spectacular Denver show I was at), the tour spanned 72 cities in 24 countries. The premise: Murphy, along with original Bauhaus bassist David J, drummer Marc Slutsky, and guitarist Mark Gemini Thwaite, would play Bauhaus’ debut album In the Flat Field in its entirety before an extended encore of classics.

The influential post-punk band is credited with (or blamed for) activating the gothic rock subgenre and ‘goth’ in general, epitomized by their epic 1979 single, “Bela Lugosi’s Dead.” The four original members of Bauhaus formed in Northampton, England in 1978, split in 1983, and reunited for tours in 1998 and 2005. Then, a final, fifth album ostensibly closed the door for good. With but one-half the original members on board, it seems the 40 Years tour with David J was our last chance to hear some incarnation of the band. Murphy wouldn’t confirm or deny this and (out of respect) won’t address the question why former bandmates Daniel Ash and Kevin Haskins were absent. Did Murphy have their blessing?

“At some point I realized Bauhaus is my work just as much as my solo work. It’s my voice and words, so if I’m going to get up there and play Bauhaus, it’s going to have authenticity. You’ve got David J there, you know he was the one that started all this. Of course he knows what the songs should sound like, I just come out and do my thing like it never ended. Mark [Gemini Thwaite], he’s been playing on tour with me forever, and Slutsky [Marc], those guys know the sound, they were there. That record [In the Flat Field] has to sound authentic, it has to be played a certain way, otherwise why bother doing it after 40 years, right?” 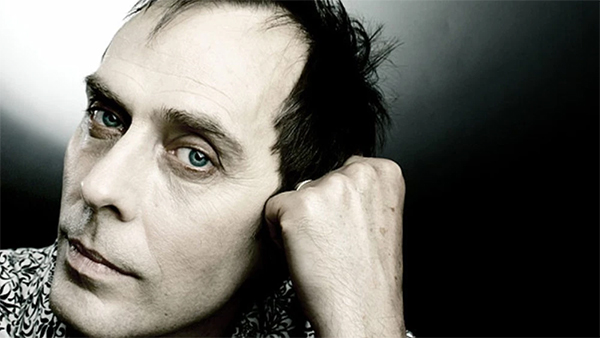 With Album 11 in the works and having far outlasted expectations, 61-year-old Murphy is consolidating his legacy. The 40 Years tour ends in San Francisco, where Murphy is playing an 18-show residency at The Chapel, performing every solo album (except for Lion) in its entirety, a few all-Bauhaus shows, and two David Bowie tribute shows. The Chapel Residency is close to Murphy’s heart. The project finally became a reality when his U.S. work visa application was approved after two years of “bureaucratic, inexplicable delays. Trump-ist, do you think?” (Murphy is a Turkish citizen and a Muslim.) He envisions replicating the Chapel Residency pilot in other parts of the world, an East Coast U.S. city being a logical next candidate. “It’s not a pilot, though, because it’s going to work.”

Apart from Bauhaus, Murphy may ultimately be remembered for “Cuts You Up.” A #55 American hit in 1990, the song was in heavy rotation on MTV, and its parent album, Deep, spent as much time in my cassette player. I’d never heard of Bauhaus, I confess to Murphy—Deep was my introduction. I tell him about a picture of me from high school: thin, pronounced cheekbones, in a black turtleneck, mopping Murphy’s pose from the album cover. He trades a story from the same time period when he was sightseeing outside London’s Westminster Abbey with his wife and daughter. The toddler suddenly darted through the crowd to a sculptor who had attracted her attention, where she struck that same pose. “Deep. She’d never seen it. Maybe I copied her?” he laughed.

No band could copy the aura projected by Murphy, Thwaite, Slutsky, and David J at the second sold-out show at Denver’s superb Oriental Theater. I was in no way prepared for them to be that good; it was actually disturbing. From some alternate plane, they deployed groove after heavy groove with brutal precision. With a psychedelic, pealing barrage of sonic warfare, they delivered the stillbirth apocalypse of “Stigmata Martyr.” The sound quality was shocking, in perfect balance with Murphy’s voice. That voice. Hypnotic, commanding, it hearkened the stamp and vintage of punk. Murphy evinced a mercurial, unsettling stage presence, deliberate and economical with his body’s movements, never committing himself physically more than once.

Breaking character, Murphy stationed himself at a drum effects pad, joining the rest of the band in summoning the percussive, syncopated fragments of noise heralding “Bela Lugosi’s Dead.” Receding into the background upstage, he literally left the flat field of view, transmogrifying and crackling through ceiling speakers up high, before cascading earthward. While tears rolled down my face, old punks stood arm-in-arm, bellowing laughter, slapping each other’s backs. They weren’t shocked at all.

Charles T. Stokes is a nonprofit resource development coordinator and donor researcher based in Denver, USA. He’s also a tennis player and writer looking to make a racket with his own noises. “There are places in the world where one cannot publicly listen to or perform whatever music they choose without fear of harassment or prosecution. The freedom to write about new music is power, a privilege.”