When the first wave of promotion started circulating online about the upcoming Mötley Crüe Netflix movie a few months back, I was curious, however, worried that my beloved childhood heroes would be poorly represented on screen and may suffer their final career flop. To my surprise, this movie absolutely rocked, with super high-octane moments from start to finish and a well-paced storyline leaving no dull moment. The characters were raunchy and believable with hair and makeup so good that, from certain angles, you thought the actors were the real thing.

Having been a Crüe fan as a very young impressionable pre-teen, I remember vividly how Mötley Crüe looked, moved and did their thing while almost single-handedly turning a rather dull musical decade upside down. Let’s face it, these guys were the biggest, most talked about and most outrageous glam / shock metal band North America had ever produced. The film’s historical data and reanimation of The Crüe is absolutely PERFECT with the odd (made for screen) embellishments. Outside of certain memorable details that were left out of the book “The Dirt’s”, the screenwriters captured the most entertaining moments that exploded on screen and kept you locked in for one hell of a 117-minute ride. The movie hits a serious peak at the 40-minute mark when Ozzy Ozbourne makes an appearance showing the young band what crazy is truly all about. Ozzy joins the band at a hotel poolside when the shocking scene unfolds of him snorting ants and lapping up piss while hotel guests look on in absolute disgust. A montage of epic hotel trashing follows this scene to the song “Looks That Kill” that will have you laughing OUT LOUD! After watching this film you simply want to see MORE of these debaucherous characters and sleaze-filled stories to unfold. I’m sure if Mötley Crüe wanted to follow up with a film called “Crazy Road Stories” they could make a rather gripping 3-part series. 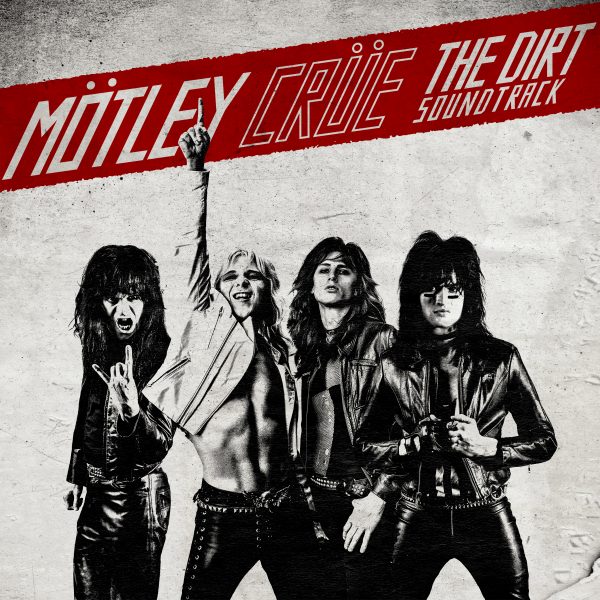 Along with moments of gut-bursting laughter and adrenaline, there are moments of intense sadness. When the film breaks down Vince Neil’s personal struggles with addiction, family turmoil, and tragedy, actor Daniel Webber simply breaks your heart. Between the packed arenas, platinum records and non-stop money train, Vince Neil had unimaginably tough hurdles to overcome. After unintentionally killing his best friend in a 1984 drunk driving accident, Vince also lost his 4-year-old daughter to cancer all of which was detailed in some intense moments on screen.

Nikki Sixx’s character, played by Douglas Booth, turns up the anger, adrenaline, and cool factor with his fits of rage and overall bad boy persona. Sixx’s scenes of heavy drinking, fighting, drug use, and early family struggles, reels you in and makes his complex yet addictive character hard to resist.

Tommy Lee, played by rapper Machine Gun Kelly, brings down the house with his insane backstage behaviours and terrible choices. The movie details Tommy puking on a stripper, being handcuffed by his manager to his bed most nights on tour to keep him in line, performing cunnilingus to a groupie in a full room of partygoers, scarring hotel guests shitless and basically being hammered 24/7. One of the runaway highlights of the film is when Tommy chronicles a typical 24-hour span during life on the road between planes, shows, strip clubs and hotel rooms where things get WAY out of hand.

Finally Mick Mars, played by Iwan Rheon (Game of Thrones), delivers a perfect portrayal of the quiet, yet stern and often pissy guitar player, a man who’s all business all the time and rarely has time for chicks or insane antics. Mars gives the audience a turning point in the film with one of the best one liners, when he exclaims during his audition; “I’m paying child support and sleeping on park benches, so I need to know you’re not pulling dick here, because I’m ready to go the distance” not only showing Tommy and Six that he’s ready to put in the work but to also be a huge driving force in the band. The film also details Mars’ physical challenges, having to deal with a lifetime of ankylosing spondylitis prior to and during his career with Mötley Crüe. The man would hit the stage during nights when he could barely move.

The Dirt is the ultimate exclamation mark on the career of powerhouse band that left a generation of music fans shocked, entertained and damaged in the ears. This band of cross-dressing lunatic outlaws were in fact very well-represented on screen and if you are looking for a good hard laugh and a quick breakdown of what Mötley Crüe was all about, The Dirt has everything you need.

Andre has been writing for The Spill Magazine for over 12 years, dating back to the print days. His passion for music goes far beyond writing reviews for new music and live concerts, he is also an active musician and producer on the Canadian music scene. Having toured North America and Europe with various acts, he is no stranger to dedication and work ethic new bands must endure to make the grade in today's market; Andre always delivers perspective writing that is authentic and to the point. Mr. Skinner typically covers indie rock, grass roots, electronica and is our resident hard rock and heavy metal specialist. He is extremely selective on what bands he covers for articles and you can rest assured they are ALWAYS band to watch with something left of centre to offer.

SPILL MOVIES: STILL ON THE RUN: THE JEFF...