Few artists, if any, have enjoyed such a surprisingly long career full of various peaks which, on multiple occasions, have steered the course of rock ‘n’ roll, punk, and ultimately, popular music as Iggy Pop has. Pop fronted The Stooges – the first punk band, just over half a decade before punk was even a thing, before embarking on a successful solo career. This brought along stellar collaborations with none other than David Bowie and, more recently, Josh Homme. Pop is equally illustrious as he is innovative and influential. It is because of this that Tyrant Books have partnered with Fat Possum Records to bring forth Iggy Pop – Bare & Real­, a vast collection of photographs from rock photographer extraordinaire Paul McAlpine which traces Pop’s career. The book also features a foreword by Pop himself as well as several anecdotal stories from McAlpine which ties Iggy Pop – Bare & Real­­ together quite nicely; ultimately making it a truly exciting affair for any Pop fan. The book is currently slated for a highly limited run of 1000 copies.

From a photography standpoint, McAlpine lives up to his reputation. The photos, following Pop from his solo debut tour in promotion of The Idiot in 1977 to his 2016 Post Pop Depression Tour where he performed alongside an all-star band consisting of members of Queens Of The Stone Age and Artic Monkeys, are stark and crisp. While they are all in black and white, they follow Pop through a series of tours. As a fan, it is thrilling to see Pop’s progression through McAlpine’s lens as his band packs theaters, clubs, and concert halls, along with shots from behind the scenes. The photo of a dapper Bowie beside a sweaty and shirtless Pop backstage after a show on the Blah Blah Blah tour especially is a highlight among these. What is perhaps most enjoyable about McAlpine’s work is his ability to perfectly capture the relentless, chaotic, and infectious energy of an Iggy Pop concert; moments of musical serenity are surrounded by violence, rage, machismo, and utter showmanship which ultimately serve as a reminder as to why no one does it quite like Pop. 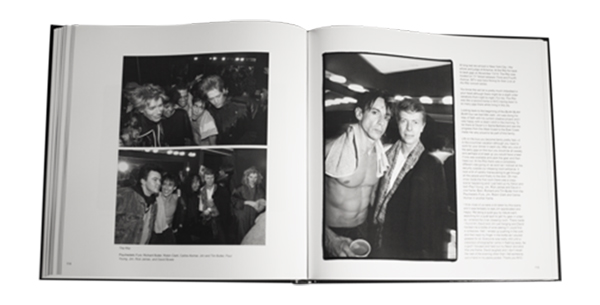 Of the text, what little there is, McAlpine recounts stories which contextualize the photos. His remarks range from statements describing the show to humorous stories which bring a new dimension to his long-time relationship with Pop. Throughout the chapters, he also includes set lists as well as a rundown of all the touring musicians on each tour. In the truest sense, Iggy Pop – Bare & Real­ is simply a coffee table which one is meant to flip through, and as the cliché goes, McAlpine’s photography speaks volumes which essays could not.

All in all, Iggy Pop – Bare & Real­ is an exciting look at a decade’s worth of solo tours as well as a brief glance at what Pop has been up to in the last few years. I cannot praise McAlpine’s work enough for his ability to capture a series of incredible, once in a lifetime moments which takes Pop’s life beyond The Stooges into the forefront. While many coffee table books have been released in the last few years – Jeff Gold’s and Pop’s Total Chaos: The Story Of The Stooges and Ed Caraeff’s Iggy & The Stooges: One Night at the Whisky 1970 both come to mind – none, to my knowledge, have followed Pop’s material throughout the late ‘70s into the ‘90s as closely as McAlpine has. Iggy Pop – Bare & Real­ is a quintessential addition to anyone’s library.

Paul McAlpine (born 1956) is an American photographer known primarily for his photographs of 1970-80’s Rock n’ Roll musicians. He has worked with such artists as Aerosmith, Boston, The Cars, Queen and many others. His photographs are in the collection of the Museum of Fine Arts, Boston, Hard Rock Café, as well as various private collections internationally.

A passion for music has always been a part of Gerrod’s life. As a young boy, he was raised on a steady diet of the music from The Chili Peppers, Aerosmith, The Stones, Prince, and others from his mum. Raised in the GTA, Gerrod continued to foster his love for music by attending a wide range of concerts and learning the drums. His unapologetic passion for music has no bounds and has spread to a wide variety of styles, whether it be the 90’s rock that sound tracked his teenage years, the jazz he studied in university, or his newfound love for hip-hop. He recently received his bachelors in music and education from York University and is passionate about writing and reviewing good (and less than good) music. Gerrod is also the drummer and songwriter for a Toronto based rock & roll band, One In The Chamber.

SPILL NEW MUSIC: BANNERS DEBUT INSPIRATIONAL NEW SONG “GOT IT IN YOU (ACOUSTIC)”