LITTLE STEVEN AND THE DISCIPLES OF SOUL

There was a revival in Toronto tonight: Little Steven and The Disciples of Soul returned to town to spread the word of rock and soul at The Danforth Music Hall. Little Steven lead the spiritual happening, and the audience felt  it. He and his 14-member band not only brought the word of soul, but also the word of peace, understanding, and togetherness to those who want to receive it.

This is one hell of a tight and hot band. Little Steven has assembled some of the finest players in the world,  and the result is two hours of pure energy. It was a brilliant show, and one where people who attended will say ‘you should’ve been there’.

For this tour, Little Steven and The Disciples of Soul are promoting their most recent album, Summer of Sorcery, the first  that album of original work released in quite some time. It is a fantastic album, and Little Steven is smart enough to write one that not only can be sonically reproduced on stage, but in some instances sounds even better.

Little Steven and his band took to the smoke-filled stage, and immediately launched into the album’s opening track “Communion”. They were off to the races and did not stop to catch their breath once. “Party Mambo” was next, a song that takes on new life when performed live. 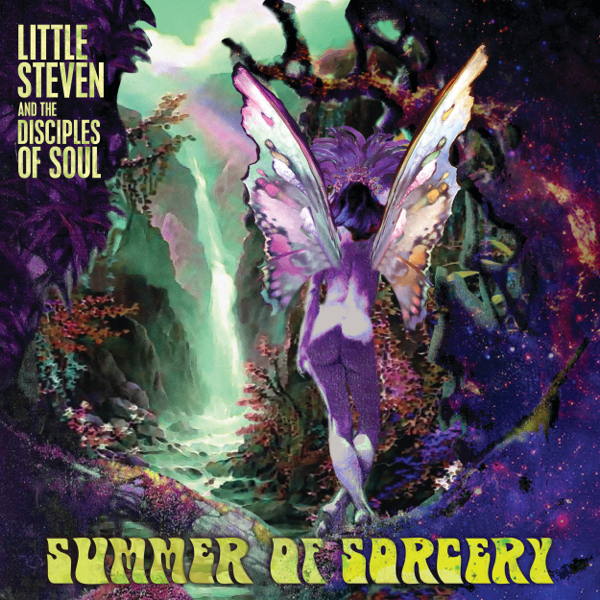 Of course there were some covers, including The Youngbloods’ “On Sir Francis Drake”, a fitting choice as original Youngblood member Lowell ‘Banana’ Levinger is in the band. Little Steven also took on some Southside Johnny and The Asbury Jukes and performed a perfect version of “Trapped Again”. The bulk of the show, however, came from his new album, as it should.

Little Steven sounded great, and his musicianship was top-rate. He plays and sings with heart and soul, and feels every word. He lives this stuff. He educates others about music, and spreads a message of peace and tolerance without being too hard-hitting.

While Little Steven gave it his all and was of course centre-stage, he was supported by one hell of a band. For the most part, this is the band from his last tour who backed him on Summer of Sorcery. The Disciples of Soul Include three brilliant singers — Jessica Wagner, Sara Devine and Tania Jones. Their horn section is second to none, and Little Steven, very smartly, spotlighted it throughout the show. Consisting of Eddie Manion (horn director, baritone saxophone), Stan Harrison (tenor saxophone, alto saxophone, flute, oboe), Clark Gayton (trombone), Ravi Best (trumpet) and Ron Tooley (trumpet) added so much to the show’s energy and soul, but the whole band was brilliant.

Little Steven revived the old style rock shows and the audience appreciated every second. It was a hot night both in temperature and in music.