KrashKarma consists of Ralf Dietel, singer and guitarist, and Niki Skistimas on drums and vocals. Known as the “The White Stripes of Metal” this talented duo is just as heavy as any full hard rock/metal band, and they know how to put on a show. There was no shortage of entertainment as they played high energy, hard-hitting songs from both of their albums Paint the Devil and Morph.

Dietel jumped off speakers and played his guitar with a bow. Skistimas stood on her drum set (a frame built around the bass drum so they can stand on it) and smashed a cymbal that was laying on the stage with a bat.

Things slowed for a moment while Skistimas sang “Voodoo Dolls”, sitting down on the edge of the stage and encouraging audience members to gather around and sit down next to her. 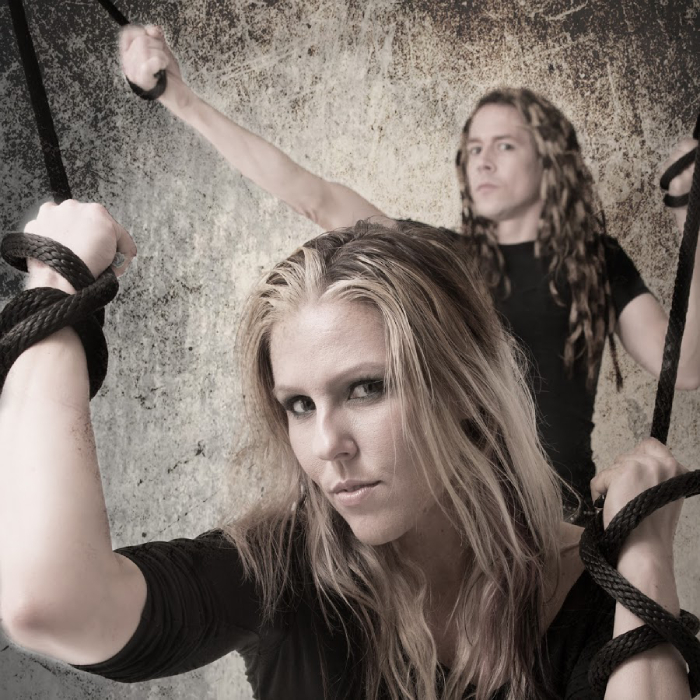 The momentum quickly picked up again as they played their version of Bananarama’s “Cruel Summer.” The grand finale was Dietel playing his guitar solo from “Tears” standing on top of a table near the stage.

After a brief changeover modern hard rockers Eve to Adam kept the momentum going with a thirteen-song set that began with Taki Sassaris in a black straitjacket singing “Straitjacket Supermodel.”

With catchy guitar riffs and great song writing, the band was firing on all cylinders. The audience bobbed their heads and cheered, raising their drinks in approval after each song, especially during “Day Drinking” which is currently moving up the rock charts.

Before the end of their set, Sassaris invited the audience to support a cause which is near and dear to their hearts “22 Dreams Come True”, an organization that raises funds to assist veterans with mental health issues in an effort to reduce suicide rates.  The crowd applauded. Donations can be made at https://www.2vetsoam.org.

They finished up their set with “Immortal” and “The Price”, an excellent ending to an evening of multi-talented musicians playing just all-around great music.