Montreal’s Fleece was the opener for Born Ruffians, and they put on a fantastic set of psychedelic sounds and guitar riffs. As they finished up, the crowd applauded and patiently waited for the main act as the venue started to fill up.

Born Ruffians opened with “Needle,” and the crowd immediately began to sing along. Playing under colourful flowers while wearing floral dress shirts, bass guitarist Mitch DeRosier and drummer Steve Hamelin passionately move their heads up and down to the music. At the same time, lead singer Luke Lalonde matched his bandmate’s energy with his powerful vocals. 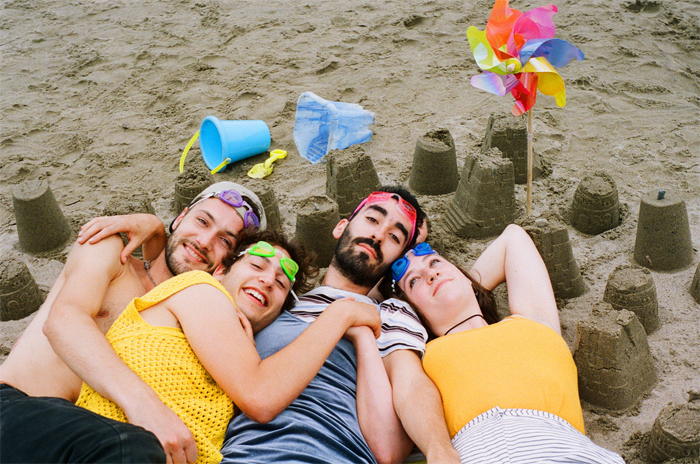 “I wish we could play all night,” says Lalonde as the band continues to perform song after song with endless energy. The band members of Fleece as well as Last Dinosaur’s Lachlan Caskey joined the band onstage to play “Working Together”. The song had everything from the crowd singing along and Hamelin crowd surfing with the audience twice! It was a fascinating sight to watch.

The crowd pleaded for one more song, and Lalonde returns on stage to perform an acoustic version of “Barnacle Goose,” before the rest of the band returned to perform “Fade To Black.” Just when the audience thought the concert was over, Hamelin announced, “Let’s do one more song!” The whole crowd loudly cheered in excitement and quickly returned to the front of the stage. “You made it happen. It’s because of you!” Hamelin said before the band played the final song of the night, “Kurt Vonnegut.”

The audience left the venue full of happiness while many stayed to have a chat with Born Ruffians and Fleece. It was indeed a memorable show.

Andrew is an aspiring photographer hailing from Toronto, who is currently in his final year at OCAD University. Ever since he took pictures with his old iPhone at an Imagine Dragons concert in 2018, it began his goals and dreams to pursue a career to photograph live music, and to work in the music industry. He loves concert photography because it combines his passion for photographing memories and listening to music. His favourite genres of music are pop, electronic, and alternative rock.