The swaggering Black Francis spoke for the first time to the audience, as new cut “St. Nazaire” broke down. “In a train-wreck, sometimes you play a different song.”

Not that there was a lack to choose from.

Tonight, Pixies appeared at a sold out show at The Phoenix Concert Theatre, a beer-soaked auditorium in Toronto’s Cabbagetown neighbourhood, the air filled with smoke, a room full of d t-shirt adorned fans. Supporting their recent release Beneath the Eyrie, the band went through classics, book-ending the show with “Cactus” and “Bone Machine”, while mixing in cuts from the new album, including the aforementioned excerpt of “St. Nazaire”, “Long Rider”, and closer “Death Horizon”.

Ever the workhorses, anyone expecting between-song-banter would leave disappointed, as the sweaty-headed Pixies trudged through their catalogue, seemingly as the last song ended. Each band member had a time to shine, perhaps most notably bassist Paz Lenchantin, to whom fans shouted birthday wishes to between every number. Lenchantin’s surly shriek provided a stark contrast to Francis’s macho swagger, perhaps most evident in her harmony in “Bone Machine”. For Surfer Rosa cut “Vamos”, guitarist Joey Santiago dazzled the crowd with using a cap as a pick, taking his time as the audience remained on their feet, cheering enthusiastically at every strum. 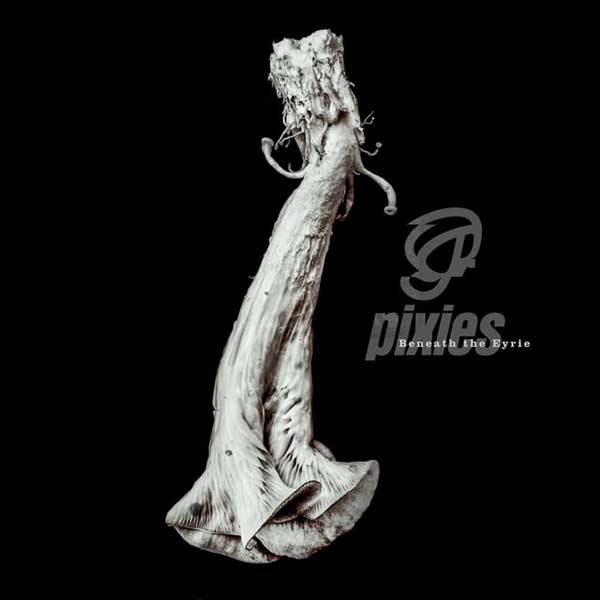 PURCHASE BENEATH THE EYRIE VIA ROUGH TRADE

Although up until the abbreviated “St. Nazaire” Francis refused to address the audience in conversation, he’d make sure to do so through song. In “Hey”, near the end of the show, the frontman took his time with the opening line, a deadpan way which added a bit of humour to the set. Each cocky “hey,” or “uh” would be greeted by cheers. When the band brought out “Here Comes Your Man”, they knew the audience knew every word, and in a way, joined in.

Opening for them were Toronto-based electronic post-punk duo Ice Cream, subbing for Kristin Hersh, who would be announced as dropping out from the show hours before. The techno-heavy set was well-received by the crowd, with each member providing vocals, as well as each playing respective instruments. One could think of a 2010s re-imagining of Tom Tom Club when listening to their set, perhaps with a bit of Depeche Mode mixed in.

Overall, for a band whose influence can’t be understated, a train wreck is the last thing the Pixies’ appearance at Phoenix could be described as. In the frenetic two-hour set, with no breaks in between, it was seemingly a mashup of the last 30 years. It was a celebration, not just for Lenchantin, but for the entire band.

When the Pixies decided to play a different song, it made no difference. “St. Nazaire” was quickly forgotten, and “Debaser” took its place. At the end, when “Bone Machine” would close the show with a jolt, not much had changed in the last 30 years. It was still a song for Carol.

King Dawit of Aksum considers himself the Psychedelic Cowboy. Raised on The Beatles, Queen, Stones, and Crosby Stills Nash and young, you can never find Dawit listening to the same thing two days in a row, whether it be 70s progressive rock, or late 60s baroque pop. Dawit is also a Toronto-based writer, filmmaker, and music producer. Among his favourite writers are Hunter S. Thompson, Terry Southern and Lester Bangs.

SPILL VIDEO PREMIERE: BETTY MOON – “CRAZY (WHAT YOU MAKE ME)”