A CONVERSATION WITH TOM OGDEN OF BLOSSOMS

After a period of semi-sleep, there is a new British invasion on the way that will shake up the North American music scene. Bands like The Marmozets and Black Honey will have to be for another day, as leading the vanguard for now are The Blossoms, an indie pop band from the northern town of Stockport, UK, who are selling out arenas. They already had a number One album with their debut album Blossoms, something lead vocalist and guitarist Tom Ogden described as ‘surreal’, but born from hard work and emerging talent. The band is now preparing for the release of their much anticipated third album: Foolish Loving Spaces and rehearsing for their upcoming arena tour.

Ogden notes that the chorus is at the heart of all good Blossoms songs; he presents the hook and melody alongside the catchy chorus that is a hallmark of the album as a whole. “It falls out of you, the chords.” He sits purposefully to write songs around the time when an album is planned and he will have made notes on possible song titles to work around; after that it is “like a blank canvas” that begins to build up around the themes, with a build-up of  the chords and melody. He’s been writing songs since he was 15 and is able to infuse the millennial with the giants of the past.

The Blossoms are a guitar-based band, with a synth rhythm giving them an ‘80s feel. Brought up on the music of bands played by their parents at home, Ogden notes influences like Duran Duran that one can hear in the music, feeling the “sparkle” that was there in the songs of the period were the energy behind so much of his songwriting. Speaking to Ogden, you get the feeling that he absolutely loves the bands of that era and enjoys talking about them with a remaining youthful sense of the fan. The album certainly had a feel of Duran Duran and, with certainty, had a strong commercial pop appeal that will see much radio play. Also, the lads can really play, he spoke of the “busy and groovy” bass of fellow Blossom Charlie Salt and I raised the drumming of Joe Donovan. The drumming is a feature of the new album, slightly underplayed in the mix but really on the nail. He agreed that the drum sound really complimented their sound with “no extra fills” but a sound rhythm that often came from Donovan “playing around”, but giving a “live drum feel” on the album. This is one of the reasons the album grabs attention, it definitely does have a live immediacy to it, and even though Donovan is coming to drumming quite late, he adds a lot to the tight beat that drives the songs. 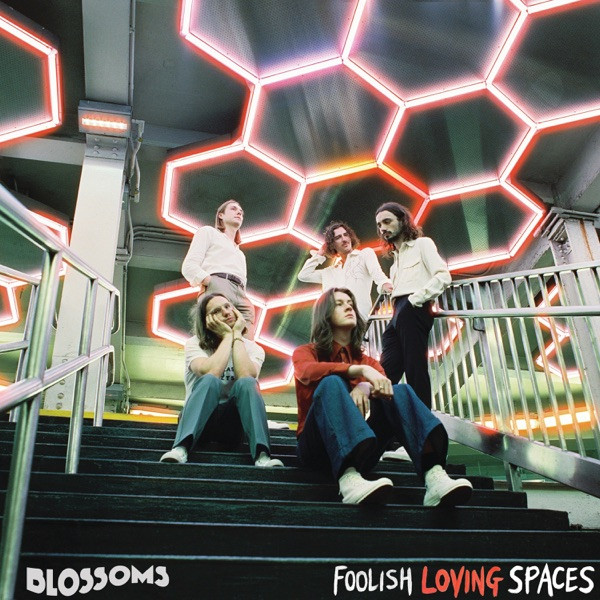 The Blossoms are all great friends and interestingly were all born in the same hospital. They have a great sense of humour, watching some of their videos shows this (check out ‘Your Girlfriend’), and the way they connect to their fans is real too. Ogden discussed the band’s ‘pubcast’, an award-winning podcast they started during a quiet spell between albums. It is recorded at The Blossoms pub for which the band is named, and if you check in it is full of laughs and banter as the band joined by Charlie’s grandfather, all help connect to their following. It’s really good fun and something rare in the music business. “We are mates, a band of five members, and we don’t take ourselves too seriously.” Tom more than anything seems to enjoy life, and this shows in the music, it’s music to make you smile in these darker times.

In 2020, the band is heading into a UK arena tour, and they hope to continue on to tour North America as well. According to Ogden, a band’s income today is driven by live performance, and the record comes out to “power the show.” Happily, the band is connecting to the vinyl revival, their website lists a range of exciting vinyl offers, you can even order a signed copy of the new vinyl if you are quick enough. Ogden adds the setlist being generated by the singles, and the setlist gains a “life of its own” where the hits get straight to the set. For Ogden, they are not a band to feel shy about playing the hits, they are there to deliver the songs most fans want to hear. Should any reader not know the band’s sound, Ogden recommends checking into a listen of “Charlemagne”, “our biggest song for a reason,” and a song with a really strong chorus.

As The Blossoms will soon be heading out on tour, one should be checking them out for their sheer commercial appeal. They are also guitar-led, write their own music, and sing their own songs. Nothing manufactured; all fresh and ready for you!

SPILL FEATURE: RIGHT OUT OF THE BOX – A CONVERSATION WITH JEAN-MARC PISAPIA OF THE BOX