SPILL FEATURE: MISSIVE TO AN ANGEL…IT’S COMPLICATED – A CONVERSATION WITH DAVID J

MISSIVE TO AN ANGEL…IT’S COMPLICATED

A CONVERSATION WITH DAVID J

David J is a legend. Born David John Haskins, he became known as David J, when he debuted as the bassist for Bauhaus. He developed his own unique playing style, which has influenced a generation of musicians.

“My two main influences are dub reggae,” said J recently. “especially the bass stylings of Errol ‘Flabba’ Holt, and Paul McCartney, in particular the later Beatles period starting with the ‘Revolver’ album. So it’s really where those two styles meet that you’ll find me.”

While in Bauhaus, he began to write songs that he would use for his debut solo album,  Etiquette of Violence, released in 1983, the same year Bauhaus called it quits following the release of Burning From The Inside. He would continue to release 12 solo albums, and also became involved with the Bauhaus off shoot group, Love And Rockets, played with The Jazz Butcher as well as  many other bands. David J was, and is still is, in demand.

David J has released his 13th solo album, Missive To An Angel From The Halls Of Infamy And Allure.  The album is deeply personal and some of the song ideas come from very unique places, especially with the single “Copper Level 7”

“’Copper level 7′ is a hair colour favoured by my girlfriend, Darenzia. I wrote that song before we had actually met in person. We were writing to each other online and a lot of the lines in the song are taken pretty much verbatim from our conversations.

An interesting title to say the least. “The title is descriptive of my recent transit through the some fairly murky scenarios where I was fraternizing with various ‘ladies of the night’ and also being something of a womanizer and really getting a bit lost. The identity of the angelic recipient of the missives in question has been revealed elsewhere and there are several clues that answer that question on the album as well. Central to the emerging story is a love triangle. I (we) are still working it all out. It’s complicated!” 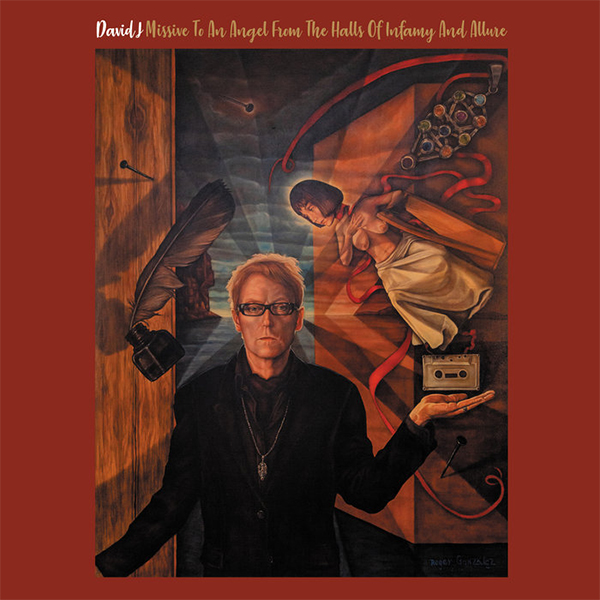 After having released 12 albums, all of which are different, coming up with ideas for an albums must become challenging. Not so for David J. “I have never set about creating an album. The songs simply bubble up and I am seized with a compulsion to realize them. It is all very spontaneous. Once I have the basic song then I hone it but I don’t like to overwork these things, preferring to keep the essential and initial urgent spark that ignited the song in the first place.”

With that in mind, the new business model for music must fit in for J. “I love the idea of being able to instantly share music without having to wait for the process of manufacturing a product but it’s very much a double-edged situation as I and many other musicians have lost a lot of revenue due to online pirating and streaming. Then again, I have also discovered so much great new  music through the same channels . So, yes, double-edged indeed!”

For J there is more going on than the release of a new solo album and some solo dates in Europe (which he played with The Psychedelic Furs and The Jazz Butcher). He has also recently joined up with Peter Murphy for a tour.

“It was inspiring to be sharing a stage with Peter again and to be playing that music which hasn’t dated in the slightest. In fact I think that it sounds better now than ever before. It was also a very bonding experience as we had some real heart to heart talks and came out of it feeling much closer. “

And now he is getting ready for some dates in Los Angeles with the original lineup of Bauhaus. This is not the first time the band has reunited,  but it is the first time the four have played together in 13 years. “We simply received an offer from out of the blue from some promoters to play a show at the Palladium in LA which is where we played the three initial shows that led to the 1998 ‘Resurrection‘ tour and as we are now playing three nights rather than one there is something of a feeling of déja-vu about the whole thing!  Frankly we were receptive to the idea of another reunion as we had been brought together by the news of Peter’s heart attack. When something like that happens it really puts things into perspective.

“Well, obviously playing with Bauhaus garners a much larger audience than me, solo and I do relish the electricity that comes with the big event but what I like about playing solo is the intimacy that’s there. Especially when playing the ‘living room’ circuit which I have been doing for several years now.